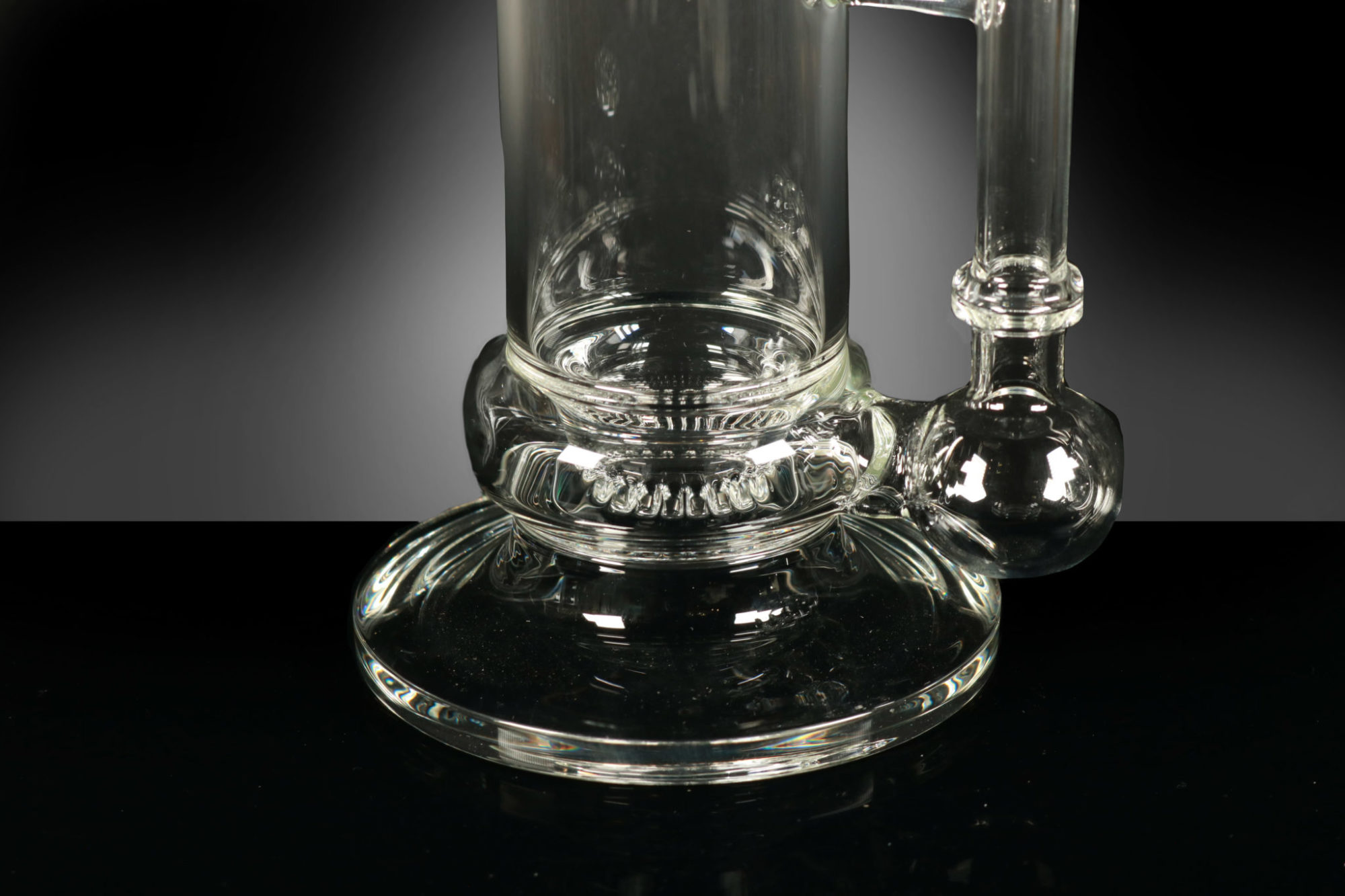 What is Scientific Glass?

Scientific glass, also known as science glass, is the industry standard when it comes to smoking, but what exactly is it? You may already be smoking out of science glass and not even realize it! In fact, a huge number of bongs, glass dab rigs, bubblers and pipes now feature scientific glass.

What is Scientific Glass?

Scientific glass is any glass water pipe made from borosilicate glass, which is a special type of glass that contains large amounts of boron trioxide and silica. In general, scientific glass bongs are also made using a glassblowing lathe, a tool that keeps the piece rotating evenly while the artist works. This tends to give scientific glass its clean, uniform aesthetic. Scientifically speaking, borosilicate glass has a very low coefficient of thermal expansion – this means scientific glass will not crack as easily as regular glass when exposed to extreme temperatures, like those you create while lighting up your finest herb.

Related: How to Blow Glass

Scientific glass has simple lines and clean colors, and is usually made using pieces of stock tubing. As its name suggests, scientific glass looks like it came straight out of a scientific laboratory or sci-fi movie. Scientific glass is typically clear, but may feature a limited amount of color, especially at the base or mouthpiece. A common attribute of today’s scientific glass is the use of 14 and 18mm glass on glass frosted joints. Also commonly seen are various types of percolator/diffuser used to filter smoke!

Why use scientific glass?

Scientific glass makes attractive, durable bongs, glass dab rings, bubblers and pipes that are easy to use and easy to take care of. These products stand up to the high temperatures and abuses of everyday cannabis use. They also offer superior filtration potential over simpler designs. The industry has a huge assortment of diffusion techniques as well, like percolators, better known as “percs.”

You may also like: How to Clean a Bong

Tree percs are generally thought to have been developed by Leisure Glass and JP Toro, can have as few as 3 and as many as 54 arms!

The matrix per was invented by Mobius, and offers some of the best filtrations in the world via a network of holes created by an overlapping flame polished saw cuts.

These percs can be considered an advancement on the tree, offering more bubble stacking potential and a tougher design. They are common in many designs today!

Inline percs are long horizontal fixed downstems with holes or saw cuts in them, were invented by HOPS, and then advanced into the Stemline/Gridline design by Stephen C. These are just a few of the many options available to you if you choose a scientific bong!

Many types of disc percs exist, from Turbines to Fritted Discs to Honeycomb diffusers. Simple saw-cut discs can be found in early JP Toro designs. PhX is considered by many to be the inventor of the Honeycomb disc. The Turbine disc was invented by Steve Bates. Turbines will spin your water and smoke into a tornado, preventing splashing up the mouthpiece. Honeycomb discs offer some of the greatest filtration potential in the industry, at the cost of some increased maintenance. Fritted discs are a common particle filter in scientific laboratories and were adapted into bongs by David Goldstein.

Scientific glass offers a number of benefits over standard glass. These benefits include:

Does scientific glass hit differently than other types of glass pipes?

Glass pipes can often deliver a rather harsh hit that makes you cough. This is because dry air mixes with warm smoke, which can be hard on your throat and lungs. Water pipes overcome this by drawing the smoke through water to cool it before it reaches your lungs. Pulling air through water creates bubbles; standard bongs create large bubbles that can still deliver a harsh hit. The COE of scientific glass allows for the creation of intricate percolator systems that create smaller bubbles, thereby offering a smooth, buttery hit that’s easy on your lungs. Smaller bubbles cause more of the smoke to come in contact with the water, due to the much higher surface area when comparing many small bubbles to one large one. This offers much cleaner, cooler smoke!

What’s the difference between heady and scientific glass?

Scientific glass is often compared with heady glass, which uses advanced glassblowing techniques to create visually appealing effects. Heady glass looks more like a type of sculptured art in which artists can express themselves. Scientific glass, by comparison, often features thick, strong clear glass with straight lines and minimal curves, with a focus on filtration.

A new branch of glassblowing, appropriately being called “Heady Scientific”, features scientific design choices like tall straight tubes, glass on glass joints and complex percolators, while still using the spectacular artistic techniques found in heady glassblowing. Artists like Hops Glass and Hedman Headies, available here at the Bern Gallery, can scratch your itch for both form and function at the same time!

Where can I Buy Scientific Glass?

Many retailers offer science glass bongs, rings, bubblers and pipes in the classic science glass shapes and colors. We offer a wide selection of scientific glass products that are both attractive and durable.

Posted on January 25, 2022 to Bong EDU
Shopping cart
There are no products in the cart!
Continue shopping
0